On April 17th I went skydiving for the first time, two days before my birthday.

We drove from our home in Fayetteville, Arkansas to Freefall Express in Mount Vernon, Missouri, about a two hour drive.  The weather was a little cool, and overcast.  The people at Freefall Express were very friendly.  Since it was my first

time, I opted for still pictures and a video…of course, I needed evidence of the experience!

My first jump was what’s called a tandem jump.  They take you up to about 10k feet in a small Cessna airplane (a C182 or 206?), the plane was just large enough to hold the pilot, myself, the instructor, and the photographer.  Once at jumping altitude, shortly before jumping, you and the instructor are harnessed together,  his chest to your back- you’re in the front, so you’re facing the ground with an unobstructed view.  You end up with a freefall of about 40 seconds before the chute is opened.

The experience was not what I thought it would be.  During the days leading up to my first jump, I was a little nervous about it when I would think about it in detail.  The day of actually going, somehow I wasn’t really nervous.  I was mostly fine up until the door on the side of the plane opened and it was time…I say mostly fine because I wasn’t really nervous, but I was very detached.  The situation just didn’t feel real, maybe I actually was nervous and that was just my psyche’s way of dealing  with the situation. 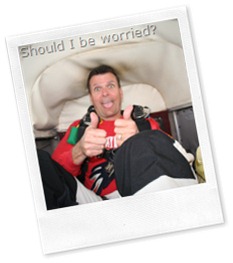 While on the ground, before taking off, my instructor asked if I like roller coasters.  I replied that I did, and he then explained that after the chute opens, we can either just have a mellow easy ride down, or we can steer the chute in a manner that results in a ride like that of a roller coaster.  I told him that I would like the coaster-style ride.

As soon as the door on that plane was opened, and I knew it was coming, I did get pretty nervous.  Immediately after jumping out of the plane, when we began the freefall, I remember my first thought being something like “why the hell did I want to do this?!”  You’ll notice in the video, the photographer says “don’t forget to smile and wave at the camera”, I replied “all right”…but as soon as we jumped, all I could do was gape at the ground the whole time, smiling and waving was the last thing on my mind.  The sound of the air rushing past my ears was incredibly loud!  Once the chute opened, I told the instructor to scratch the idea of the coaster-like ride, I now wanted a mellow ride.

I’ve had many dreams with a similar theme, the theme being that I’m flying under my own power.  I start out running, then jump, then I’m airborne and climbing, up above the trees and rooftops, and after these dreams, I have such a feeling of exhilaration!  I was very disappointed, because I was certain that skydiving would result in the same kind of feeling.

It wasn’t nearly as fun as I thought it would be, and for me, there wasn’t really much of a sense of motion.  You’re up so high, and falling so fast, but there’s nothing near you to serve as a reference point to make you feel like you’re moving.  That’s probably for the better though, because despite the lack of reference points and feeling motion, I found no shortage of fear.  After the jump, my thought was that once was enough for me.  Now that I’ve had a little time to think about it, I’m pretty sure I’m going to be doing it again.  I don’t like that I was so scared…it seems to me that the experience was mostly ruined by my fear.  So I’m thinking of doing it again sometime before my next birthday.

Have any of you out there gone skydiving before?  If so, leave a comment below, I’d love to hear how your experience was!

“The lips of wisdom are closed, except to the ears of understanding.”
- Three Initiates
from: The Kybalion